UlyssesSays.com > ThisNThat-Blog > Rant > July 4, Unwelcome in 2017 And Every Other Tuesday!

July 4, Unwelcome in 2017 And Every Other Tuesday! 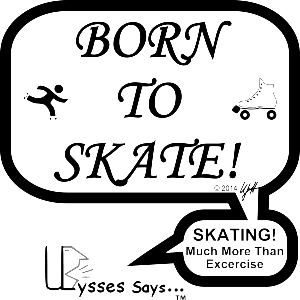 Here’s a hint July 4 — “Born to Skate!”  That’s right, “Born To Skate” and enough fourths have passed in my life time for you to know it.

Most people who know me know I love to skate and a few know I skate every Tuesday night, thus, I have a problem in 2017.  The rink I attend is part of an amusement park that puts on a fireworks extravaganza each July 4.  That means a huge crowd at the park.  Long lines start the day before.  I remember July 3, 2012, the year July 4 was kind enough to leap past Tuesday and fall on Wednesday.  When we left skating on that Tuesday night, cars were already beginning to line up for fireworks the next night.  In anticipation that skaters would have no way to get in and would have no place to park if we got in, skate-rink management canceled our ADULT session for Tuesday July 4, 2017.

I have a list of about 300 skaters who I inform about rink events from time to time.  Skate management asked me to let those on my list know that there would be no skating on the fourth.  I sent out a message to my list and at the time July 4 seemed far away, so I didn’t get upset.  However, this morning, when going over my schedule for the week, I had to deal with the fact that I need alternative plans for my Tuesday.  “I don’t want alternative plans!…,” I thought loudly and I got upset.  “How dare you Fourth Of July take my joy?” and a few other choice thoughts popped into my head and I did what I always do when I have to get something off my chest—I write, well sometimes I rant and if necessary, I’ll rant to the whole world.

Hey World, I love the fourth of July

And I have great respect for the flag, motherhood, and apple pie.

But one thing bothers me as I of think of this year’s date.

It’s gonna make me miss my day to skate.

The way I see it, something should be worked out that would last.

After all, since July 4 is so great, it should be able to skip right on past.

Like work out some deal with leap year, so when Tuesday comes into view,

It packs it’s bags, leaps to Wednesday, allowing me to skate

and do what I do.

Aaaaaahhh!  That feels better.  I should be okay until the next time I think about it.  If I get past Tuesday, I can begin to look forward to July 11, 2017.  That will make it safe for others to talk to me.  Until then everybody beware!

I still don’t see why Independence Day couldn’t just skip every Tuesday the way it did in 2012.  Maybe we could make Tuesday off limits for Independence day and get a law passed where Independence day is celebrated on July 5 whenever July 4 falls on a Tuesday.

Just in case you get to Portland, Oaks Park is where you’ll find me on Tuesday Nights. Note that the calendar for the first week of July 2017 shows skating from 1:00 PM – 9:30 PM; BUT it doesn’t show an ADULT session starting at 9:30 PM and that’s the problem.  Check out Oaks Park.

PS:  I know I haven’t posted much lately.  I post more when you comment or maybe you comment when I post more.  Okay let’s see which is chicken and which is egg.  Subscribe here (or on any page) and pop some comments and I’ll post more no matter what.  While you’re here, check out the menu (at the top or on the right side) for other posts and my Window To My World page. You might also want to check out my greeting cards on Zazzle, as I sometimes rant in short quotes on greeting cards.