It has been quite some time since my last post, but I haven’t been idle, as now UlyssesSays Introduces StoryCardsTM and TBICDTM .

For some time I have sought a way to share my favorite longer-than-quotes literary works.  I wanted something different, something that might offer a bit of a shock just because it exists.  I think I have found it in what I call a StoryCardTM.

StoryCardsTM, What Are They Besides Great Surprise Gifts?

In tests, StoryCardsTM fulfilled the expectation to provide shock appeal, as 95% of first-time viewers studied the front and didn’t appear to find anything drastically unusual.  I say drastically unusual because there was the usual “what is this” because the cards appear huge at 8½ X 11 size.  However, when they turned the page, their eyes bucked as if they had literally been shocked by electric current.  I’m really sorry to tell you this and spoil your chances for that surprise; but I’m willing to bet that you will get a great kick out of watching your friends receive and view one for the first time.  I call such shock, “Greeting Card Expectation Surprise.”

The fact is, as alluded to above, StoryCardsTM are NOT meant to convey a sentiment as is the usual case for greeting cards.  They are the gift of a story—hopefully what you will think is a very good story.  In keeping with that thought, I have started off by providing two stories that have proven track records of approval from those who have read or have heard me present either of the stories.

While it is all good to have shock value and very good stories, there remain those who just are not first adopters, those who might need help or an excuse to do something different.  My personality type says, “What better than teasing or lighthearted banter to settle fears.”  Out of that came the concept of TBICDTM .  After all, the sender is saying, “I would have preferred to do something other than give you this card—something much more grandiose—but alas, I came to the realization this StoryCardTM is the best I can do.”

Show Me The Cards!

Below are links to two cards.  The “’Junetag’ Bravo Spit and Spin” story is told on a single StoryCardTM.  However, the longer “Prince… Poodle, Pooch, or Person” story requires three StoryCardsTM to tell the complete story.

NOTE: Click on either image below.  Once you go to the site and click on the StoryCardTM of your choice. You are taken to the page that provides a button beside the image, thus allowing you to enlarge the card and read the story.  Convenient enough, it is the same page on which you can make a purchase.  Whether you purchase or not, please let me know what you think and if you like it, please like it all over social media.  After all, they make great inexpensive surprise gifts, so your friends will love you for the tip. 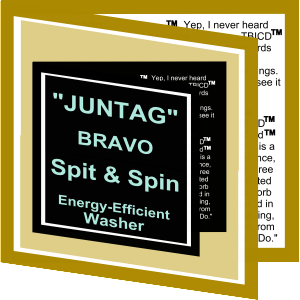 CLICK IMAGE: Join us on the hilarious maiden voyage of this energy-efficient water saving miser that did little but spit and spin.