I Miss That Good OLD Stuff!

An Email Sparked A Thought:

An email I received recently reminded me that I miss that good old stuff. The thing is that I not only miss the old stuff, I am often unhappy with the new stuff that supposedly replaces it. One of the big problems of blowing into AARP territory is that too often you can no longer get the stuff you depended on for years. When my wife and I find a product on which we depend that seems to be headed for the scrap heap, we buy up lots of it so we don’t run out before we find what usually turns out to be an “inadequate” replacement.

Memories In My Rear-View Mirror:

So, the question is why is all the new stuff so messed up? Old-timers need only to look back to feel sorry for today’s youth. For instance many of today’s cars are just plain too small. When I was a teen, you drove your girlfriend in a car that had style and size. Most, like the Buick Roadmaster, were wide enough to stuff two of today’s toy mousetraps in the trunk. And that huge bench—WOW! It beat two little buckets by a mile. Your girlfriend could sit close to you—and you know that made a statement. Yeah, when a friend rolled out sporting a new ride with his girl beside him, people would say something to the effect, “There goes Clifton and Caldonia. I know they’re (an item / going steady / together) by where she’s sitting.” In today’s tiny square cubes, you could be engaged and for all anyone could tell you and she could be nothing more than brother and sister. By way of comparison, if two of the majority of today’s excuses for personal transportation were painted black with white dots and then sent back in a time machine, past generations would think they found dice to be hung around their Roadmaster’s rear-view-mirror (By the way, it’s a good thing those really old oldies were made like tanks because most of us had to wait to get ours on the rebound, after those who could afford them new had moved on to their latest ostentatious way to say, “I have arrived.”).

Sometimes There Were A Few Bumps On Memory Lane:

Of course there was also the other side of riding with your girl on big wide bench seats, like those times when you did something stupid and made her mad. At such times, she could move over and sit by her window and seem so far away you needed binoculars to see her and a passport to visit. People like Mark and Mavis seeing you pass by would say things like, “Uhh Huh… ARF ARF, somebody is in the doghouse!” But that only meant one thing—the makeup. Yeah man the makeup! That’s when she would sliiiiide right back over close, so close that she could much more easily reach the gas pedal than you, as you sat tall with your elbow coolly riding the door at the opening of the completely lowered window bracing your arm so your left hand could steer. During those “make-up” times, it didn’t matter that the wind blew her hair, but I will talk about that later. For now, I’ll just maintain my stroll down the good part of the ‘lane. . . Yeah, those were the days.

Postulating Why Memory Lane Is So Inviting:

That last sentence may be the answer as to why “There is no stuff like that good old stuff.” Old stuff helps preserve, or in some cases bring back memories. When I see PBS specials that bring back oldies, I find that I enjoy songs I didn’t even like when they were popular. That can only be because they take me back to a time when the ratio of freedom and independence was ridiculously high compared to my responsibilities. How great it is to look back to being a late teen or early twenty-something, before marriage, and remember the freedoms of being able to play basketball all afternoon and staying out as long as you wanted while knowing there was a good mom-cooked-meal in the fridge whenever you got home.

Now, don’t take that too literally—most of us were trained to be too responsible and too considerate to make that lifestyle be 100% of our existence; but you get the point. For most, there was a time when there was a disproportionate amount of freedom/independence compared to responsibility and it is enjoyable to bask in the “stress-less-ness” of that memory. I can imagine that many of you have your own version to substitute for basketball and staying out late. Whatever it is, are you taken there by little reminders here and there that take you back so that you find yourself, like me, saying, “I miss that good OLD stuff?”

PS: For any of you who are too young to identify, know this. If you stick around long enough, your “aha moment” is coming.

Just in case you want to keep yourself or a friend reminded, I show below a quote that captures the spirit of this post. 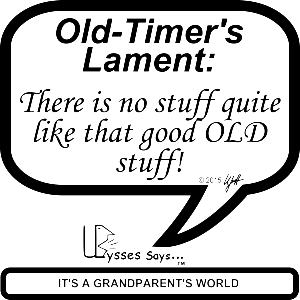