Edits Are My Friends

Okay, so it’s time to blog again. Of course that brings up the question, “how often should one blog?” It probably depends on your subject and knowing how much your readers can take before they’re tired of what’s being said. I have gotten a number of different opinions to that question and because I have no subject other than “This ‘N That,” I am free to try anything. Basically, I was told to blog at least once a week and daily would be optimal. Wow! That’s daunting. Certainly daily is absolutely daunting.

The problem is not that I don’t have any material for a daily post; the problem is that I write with the idea that the first thing I write is nothing more than a skeleton that requires 150,000 edits. Yep, edits are my friends. Usually the reason for edits is not because I didn’t clearly communicate what I want to say the first time. Rather it is that I haven’t had time to get the enjoyment out of colorizing what I want to say. What needs to be said, such as when reporting on an incident, can be said in a few sentences; but what’s the fun in that? The joy comes in taking descriptive poetic license to sanitize, hyperbolize, and/or scandalized the story. After all, I’m not a reporter, I’m not even sure I should be called a writer. I’m just a guy who enjoys playing with words. Sometimes they fall together and there is fun for all. Sometimes the fun is only mine. Let’s look at an example of how I have fun.

Why would I want to say that Mr. “Such ‘n Such” arrived at the banquet escorting Ms “WhoeverSheWas,” whose beauty was perfectly complimented by designer “blah blah’s” latest from his “Modesty” collection when there exists an edited alternative?

I’d rather say, “Mr. Such ‘n Such” displayed the advantages of a king when he arrived at the banquet escorting the beautiful Ms. “WeKnowWhoSheIs” who single handedly rescued designer “blah blah’s” latest creation from his “Modesty” collection. Though intentionally modest in design and modestly worn, her gown could not restrain curves that demonstratively refused the invitation to stealth.

Okay, so that’s kind of a wild example, but you get the point. By the way, I will have a quote on my product site under the category “Consider The Observation” that is very similar to the description of Ms. “WeKnowWhoSheIs.” For the record, Ms. “WhoeverSheIs” and Ms. “WeKnowWhoSheIs” refer to the same person. Humm… Now that I think about it, you know there are some who believe her name should be “We’dLikeToKnowWhoSheIs.”

Okay, so I feel bratty today. That is not what I planned to write. I have no idea how I got on that path. As I alluded to before, you’ll get “This ‘N That.” Today, you got mostly “That”.

PS: I just remembered. There is another reason why edits are my friends. I like my writing to sit and while it does, thoughts of it marinate in my head. The next time I read it, I am in a different place, so I see it from a different side. That allows me to see the proverbial hole in the fence that was previously hidden due to my perspective behind some mental bush. On that second and subsequent edits, I fix the hole and play with the descriptions. Interestingly enough, this piece will not get to marinate. That means I will look at in the future and wish I had some retroactive nails to fix the hole I know now will be there. You have permission to point out the hole(s). Just don’t tell me and make it worse (Just kidding – it’s out here to be picked, so comment away).

As always, don’t forget to think of UlyssesSays Gift Quotes from time to time. In this post, continuing our stealth theme, we are featuring a quote from our “Exercise Mouth And Tongue Control” Category. Check out the quote on Drinkware, T-Shirts & Clothing, and on Stickers & Flair. You can always tell me a product on which you’d like to see a quote and you can request priority in putting up quotes from a not-yet-represented category seen on this site’s Quote List page. 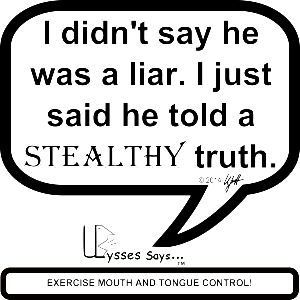